Review of the Sako TRG

Sako is a well-known manufacturer of high quality firearms.  Almost every Australian will know someone who owns a Sako 85 but it’s rare to come across someone who owns a Sako TRG.  Manufactured in two main models, the only real difference between the model 22 and 42 is the length of the action – The TRG 22 is manufactured in 260 Rem and 308 Win and the TRG 42 in 300 Win Mag and 338 Lapua.

Largely due to the price, the Sako TRG rifles do not enjoy widespread ownership.  Manufactured for use by Military groups, whom have deeper pockets than many within the recreational market, the TRG line of rifles are designed for precision long distance shooting.

Looking at the Sako TRG rifle, it is evident this rifle was always built for business – the angular design of the stock and action, the protruding bolts that hold the stock on the rifle combined with the generous float of the barrel don’t do much for the aesthetics of the rifle.  Functionality was obviously the priority of the engineers whom designed this rifle.

The rifle reviewed, in 300 Win Mag, was fitted with a 680 mm chrome molybdenum (chrome moly) barrel which has a semi-polished finish.  The big, stiff action has a port in the side only large enough for the ejection of an empty cartridge and has a flat top to the receiver with numerous holes for the fixing of sights.  The bolt release is on the right hand side of the action, in front of the bolt handle, which is the opposite side to the Sako 85 rifle, and the steel bolt handle, featuring an oversize synthetic bolt knob, is threaded into the bolt body.    The two stage trigger breaks cleanly and has a wide, rounded trigger blade to reduce felt trigger pressure.

Features and their advantages

Sako chose to fit their TRG rifles with chrome moly barrels.  These barrels are hammer forged, like any other barrel manufactured by Sako, which flattens out the grain of the inside finish of the barrel.  Any advantage a stainless steel barrel would present is rendered moot by manufacturing barrels using this method.  Sako must perceive an advantage to manufacturing barrels from chrome moly steel, but my investigations and experience only leads to a slight economic advantage.  Most rifle barrels on recreational rifles in 300 Win Mag have 24 inch barrels and occasionally 26 inch barrels.  The 27 inch barrel of the Sako TRG will have a definite velocity advantage, which will slightly increase the ballistic coefficient of the projectile.  This is an advantage when shooting at long range. 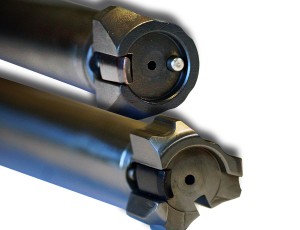 There isn’t a lot of complexity to the design of the action.  The bolt head is milled into a triangular shape to give it three lugs – much less complex than the complicated design of the Sako 85 bolt head.  When the round is fed into the action and the bolt closed one of the three lugs closes over the ejection port – if a case were to rupture when fired this would minimise the gas that could potentially strike the shooter in the face, increasing the safety.  This is again another advantage over the Sako 85, which has a much larger ejection port.  The bolt release being in front of the bolt is a bit of a pain – trying to get the bolt out of the gun when in the shooting position is made difficult by having to reach over the scope or under the magazine to push the bolt release. 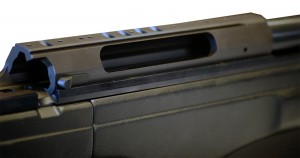 I love two stage triggers.  If set up correctly it is extremely easy to press off a controlled shot, even with a trigger pressure of three pounds or more.  This Sako TRG has a very nice two stage trigger.  While it lacks the adjustability of other triggers on the market, it was clearly manufactured with strength, repeatability and safety in mind.  The trigger bar prevents the firearm from discharging until the trigger is pressed – a trigger safety system being used more and more in modern firearms. 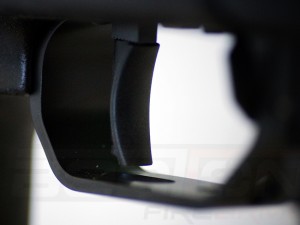 The stock of the Sako TRG is a fiberglass frame fitted over an aluminium skeletonThe action is also bolted to this aluminium skeleton.  This makes for an extremely stiff and repeatable bedding system so each time the rifle is used it will shoot to the same point.  The fore end of the stock has another aluminium rail inset into it, a rail on the side and a ‘T’ section in the front for the use of all sorts of accessories like hand stops, lights and bipods.  The butt of the stock has a butt hook for the use of a rear bag, though it would have been nice for them to make the rear hook parallel to the fore end so the muzzle doesn’t dive when the rifle is shot off bags.  The cheek piece is able to be moved side to side to allow the shooter to position their head behind the scope comfortably.  The cheek piece can also be lifted up, and the length of pull extended, but only through the use of spacers which are not supplied with the rifle.

Sako use a magazine system of their own design which works faultlessly.  The 6 round magazine in 300 win mag sits flat with the bottom of the stock.  The double stack magazines of the Sako hold more rounds than a single stack magazines, but come up to a single round at the top.  Except for the Savage magazines, single stack magazines cannot be ‘topped up’ while in the firearm.  Because of the small ejection port of the Sako TRG this wouldn’t be possible regardless, so having their magazine comes up to a single round at the top is a good idea to improve feeding.  I really do like the magazines on the Sako TRG for this reason. 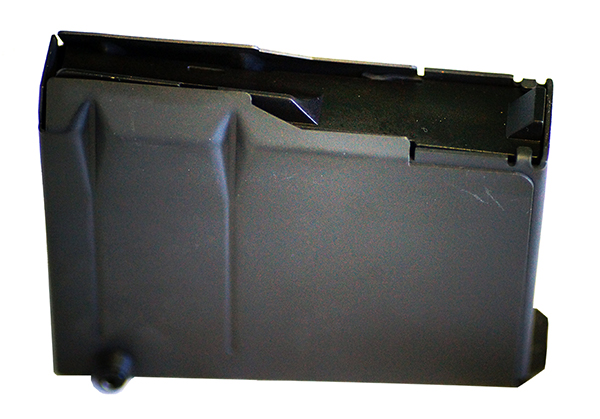 Zaine’s opinion of the rifle

If I’m dropping six thousand and something dollars, I want a gun that is finished nicely.  I can understand the military market would probably not care about the external finish and would probably add their own camouflage depending on the application of the firearm, but if you offer a firearm to the recreational market it should be finished correctly.

I hate the sandy feel to the stock of the Sako TRG.  The textured feel of the McMillan fiberglass stocks both look and feel like they are supposed to be the way they are – the Sako stock looks and feels like it wasn’t prepared correctly prior to being painted.  I also hate that the action and barrel have different finishes.  I’m not sure what Sako’s reason was for leaving the barrel with a semi-gloss finish is – I can’t image there is any tactical advantage to it.  It wouldn’t take much for Sako to bead blast their barrels for the TRG rifles prior to bluing to match the finish of the action.  Tikka have a similar mismatched finish, which I can tolerate it on a twelve hundred dollar gun, but it’s inexcusable on a product that is supposed to be the pinnacle of Sako’s bolt action rifle offerings.

Besides the general finish of the Sako TRG, I absolutely love it.  The ergonomics and practical nature of the rifle make it extremely enjoyable to shoot.  The bolt is silky smooth even though it is tight in the receiver and the trigger is crisp and consistent.  All the accessories that you can purchase with the Sako rifles work exceptionally well.  Special mention needs to be given for the Sako bipod, which the rifle hangs under rather than balances on top of.  For military applications this is a must, though it may be out of the price range for many recreational shooters.  But the main thing I like about the Sako TRG rifles is the accuracy.  For more than a decade that I’ve been shooting and selling these rifles I am yet to come across one that doesn’t shoot exceptionally well with any ammunition you feed it.  I put this down to the excellent bedding system of the rifle, which completely separates the barrelled action from any external influences.

Like previously mentioned the Sako TRG is a rifle built for military application.  Most manufacturers produce a ‘Law-enforcement’ rifle platform, including Remington and Savage.  But this rifle is in another league – I would compare it to the Barrett, Steyr or Weatherby Mark V for quality.

The Sako TRG comes in at around $6500 to $7000 depending on the exact model and calibre.  This is about $3000 less than the Barrett 98B but about $1500 more than the Weatherby or Steyr.  For what it brings to the table, I think the Sako TRG is exceptionally well priced.

So if you are interested in long range accuracy, consistency and ergonomics, I would highly recommend looking at the Sako TRG.  While it lacks the finesse and finish of a custom built rifle, you won’t be sad with the performance.