How does Velocity affect Range?

22-250 Remington is held in high esteem in Australia for shooting small vermin.  This is largely due to its high velocity giving shooters the impression that their rounds shoot “flat” and “bucks the wind”.  But how much benefit is there really in high velocity rounds such as 204 Ruger; 22-250; 220 Swift; 25-06 or 7mm Rum?

I grew up in Southern Western Australia – Marino country.  These wooly sheep are very dumb and the lambs they give birth to are frail compared to the lambs of other breeds of sheep.  Foxes prey on birthing mothers – killing the mother and half eating the lamb in the process.  I shot foxes with my father from when I was 7 years old with a variety of different guns.  Typically, foxes would be shot up to about 150 meters away, depending on how coy they were at the time.  Every night that we went out we encountered a fox that would not come to the whistle, and we would take a shot at a fox 250 meters or more away.  It’s this challenge which got me thinking about the advantages of higher velocity cartridges.

In this blog I’m going to be comparing “Fast” to “Slow” velocity cartridges and at what range you can shoot out to without holding over and still hit the heart of a fox.

* This was a guess, as I cannot find any data on a 300 Norma Mag firing anything lighter than a 150gr projectile anywhere, which is quite reasonable given it was never created to.

The best way to determine what the “Sight-in” range is with the Applied Ballistics app on your phone – the best app for developing true ballistic data.  What we want to do is use the app to decide for each caliber at what distance we should sight the gun in for and how far it will shoot out and hit the 75mm target without aiming high or low.  In nerd terms, we want the culminating point to be 37.5mm above line of sight and first catch to be 37.5mm below line of sight.

The tolerance I am going to allow with target size is 1mm and range to target 5 meters.  This is a trade off between my time and the accuracy of the results.

There are two questions that arise from this data.  The first is – how does the 26 Nosler beat both the 204 Ruger and the 300 Norma Mag when it is the slowest of the 3?  This answer is easy – Ballistic Coefficient.  The 6.5mm 95 grain projectile has a much higher BC than the .204 32 grain and the 308 110 grain.  Evidence of this is that, even though the 26 Nosler projectile starts out 180 feet per second slower than the 300 Norma Mag, by 260 meters it has overtaken the 300 and is travelling 60 feet per second faster. BC influences sight-in-distance too.

The other question is – why are all the flight times the same?  That’s not that difficult either.  All the projectiles must climb and then fall the same distance.  Gravity is the primary effect causing the projectiles to drop and gravity effects all projectiles equally.  Regardless of weight, all the projectiles take the same time to fall back to 37.5mm below line of sight.  The difference is how far they travel before they drop that 37.5mm that gives them extra range.

The short answer is – the higher the velocity, the further you can shoot without aiming off.

But of course there’s no free lunch – there is two downsides to chasing flat trajectory.  Wind drift and Barrel Life.

This is very easy to understand –push light projectiles fast and you are going to wear your barrel out faster.  How much faster?  There are a lot of factors that go into barrel wear, including how hot the barrel gets; how clean you keep it; the chemical makeup of the barrel; the hardness of the barrel; etc. But if you want to consider the extremes; A 7mm/08 will typically get 4000 rounds out of a barrel – a 7mm RUM about half that.  But a 7mm RUM shooter will have twice as much fun, so it evens out in the end.

If we run the same numbers through the app, but instead of bullet drop we look at wind drift, we get the numbers in the table below.

I’m modeling these numbers of a 3 meter per second wind coming from 3 o’clock – the same as previous modelling I’ve done.  3M/s is a moderate wind and something you expect while out shooting.  The max distance range becomes the distance at which the bullet strays more than 37.5mm from center, with the same tolerances as the previous test. 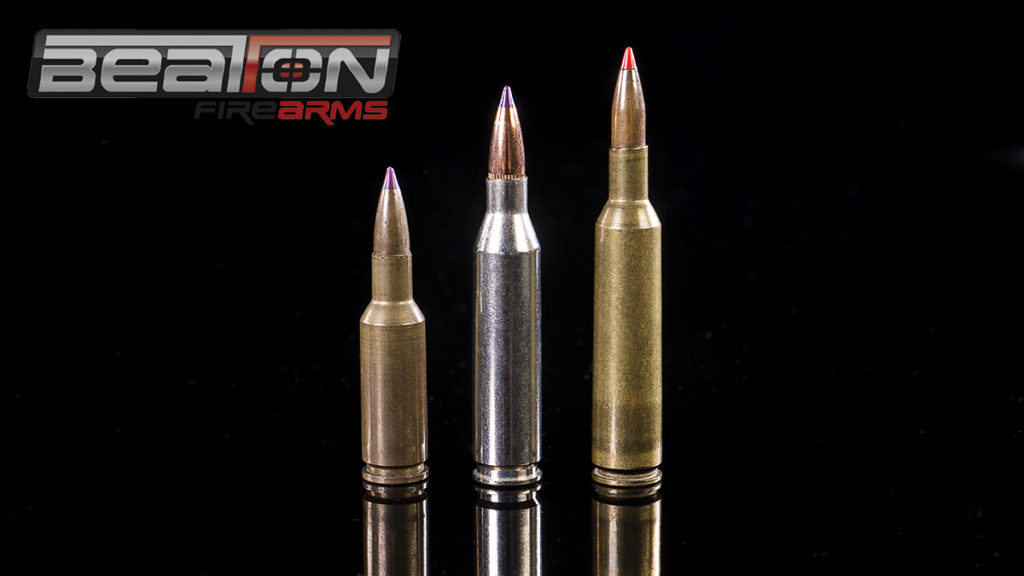 The first column demonstrates that, at the range listed, without any correction for wind, you would miss the 75mm target.  Again, the 6.5 calibers with their higher BC reign supreme, but I want to impress on you the effect wind has on projectiles.  By choosing an extremely high velocity cartridge over something more pedestrian you’ll be increasing the range by up to 40 meters, but only be adding 15-20 meters to your accurate range if you don’t take wind into account.

Wind is going to be a factor regardless of what caliber you shoot.  My message to recreational hunters would be – buy something that shoots flat so you don’t have to range the target – then you can concentrate only on wind.  You are much more likely to hit the target than if you were trying to judge both wind and distance simultaneously.

For normal people, this is the end of the Blog.  If you have any comments or feedback please email me at zaine@beatonfirearms.com.au

For those out there who may be asking how I developed some of the data I used above, or are just generally interested in the nerdy stuff association with External Ballistics, keep reading.

I wrote this further up, then moved it all down here so people who aren’t interested in my methodology don’t have to read it.

The first challenge of defining high velocity is defining a bullet weight.  A 25-06 firing an 85 grain projectile at 3450fps could be classed as high velocity, while a 25-06 firing a 120 grain projectile at 2950 would probably not.  So how do we settle on a projectile weight? That’s not a hard one to answer – it depends on the animal you are shooting and the terminal performance you need from the projectile.  For most calibers for fox shooting, it would be the lightest projectile you can get in a certain caliber.  Exceptions for this would probably be 224 and 204 projectiles – a 204 projectile lighter than 32 grain or a .224 projectile lighter than 50 grain I would consider too erratic and unreliable in terminal performance to be considered for shooting foxes.  Yes, at slower velocities like the 22 Hornet where the projectiles deform and expand at a slower and more reliable rate, a 45 grain projectile will work well on foxes, but we’re not talking about low velocities.

A good varmint projectile – one manufactured in lighter weights; across a wide range of projectile diameters and has explosive terminal performance, is the Hornady V-Max projectile. 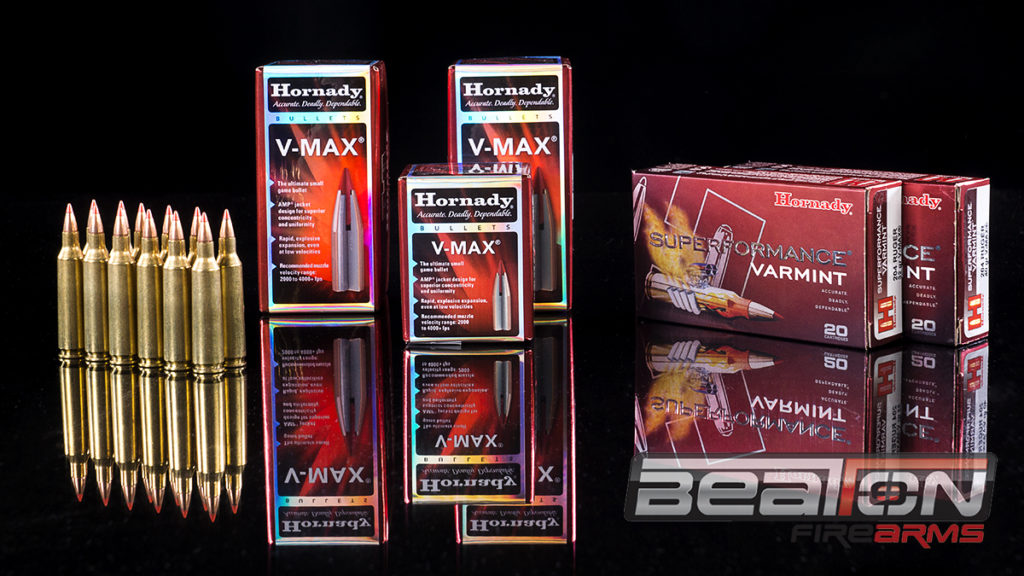 We stock a wide range of the popular Hornady V-Max products; check out our shop to see what we’ve got for you!

The term “Over-bore” is thrown around a bit.  It’s a single-term phrase expressing the ratio of the projectile diameter to the case capacity.

Normally I would try and quantify this using the powder burn rate, as it’s a good reflection of how over-bore a case is.  The more overbore a cartridge is the slower the powder burn rate required to develop velocity efficiently, but this isn’t as relevant when considering only bullet weights at the light end of the spectrum.

Instead of some clever quantification of facts to back up my assertions I’m just going to be lazy and arbitrarily pick two cartridges in each projectile diameter.  We are going to be comparing high velocity cartridges to another caliber firing the same projectile at a more pedestrian velocity.

We’re going to look at these calibers in the context of varmint shooting.  One of the most popular varmints to hunt in Australia (and an important one to hunt from an ecological and biodiversity viewpoint) is the red fox.  The red fox has a heart approximately 50mm in diameter which, like all mammals, is located in the bottom third of the chest.  Just below the shoulder, near the point of the elbow.  If we were talking about low velocity rounds or firing full metal jacket projectiles our target size would be 50mm, but because we are firing expanding projectiles at supersonic velocities, we don’t have to hit the heart to humanely kill the animal.  When supersonic expanding projectiles enter a fluid medium, such as the chest of a mammal, the fluids rush away from the projectile travelling through the body in an action called “Temporary Cavitation”.  This temporary cavitation destroys tissue inside the animal, meaning as long as the projectile strikes near the heart it will destroy the heart tissue and kill the animal.  If the projectile landed within half an inch of the heart it would destroy the heart tissue, meaning our target size is 75mm in diameter.