The process of studying for and completing the safety awareness test is the educational component for applying for a firearms license – by studying the provided document and passing the test you are deemed to have sufficient knowledge to use firearms correctly.

The new awareness test (introduced in May 2016) that all applicants for a firearms license must sit is a 20 question multiple guess questionnaire.  The questions asked are even more misleading than the previous awareness test, only now a 100% score is required to pass.  I will outline the misleading questions and answers below.  Many of the questions seem to be based around the National Firearms Safety Code, which is provided for applicants to study prior to sitting the test.

The predictable response from Police Licensing Services (PLS) would be that the National Firearms Safety Code, which is an informative document that covers a good portion of general firearm use, is a national document which has no legal standing in Western Australia – applicants need to abide by state legislation.  If that is the case, why provide it to applicants to study at all?   It seems that PLS simply want applicants to study a well written document but ignore it when it suits PLS. 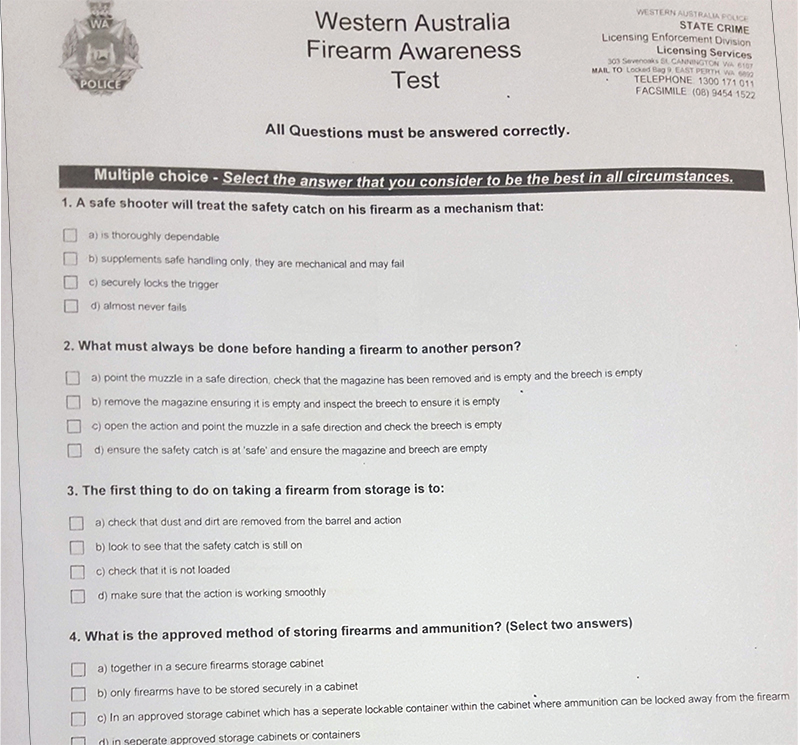 Question 2 – two answers are very similar, the only difference being a slight difference in the wording and order of the words.

What must always be done before handing a firearm to another person?

There is no mention of whether the order or the actions is important or whether some of the items are done simultaneously.

I believe this answer to be taken from Military ‘how to – ’ instructions rather than from a recreational view point.  With an automatic firearm the magazine must be removed prior to the action manipulated, as any attempt to clear the action with a loaded magazine simply results in another loaded round being fed into the chamber.  Hence, point the firearm in a safe direction, then take the magazine out and then manipulate the action to clear the chamber.  Manipulating the magazine of a firearm that is potentially loaded before opening the action is a non-sensible order of actions for a recreational firearm.  Also, many recreational firearms do not have detachable magazines.

While this answer may have a poor order of words, I think it to be a far more applicable answer for recreational firearms.

If the order of words is important then I can understand that (a) would be the correct answer, though I believe that manipulation of the magazine of a potentially loaded firearm dangerous.  If the order of words is not important then (c) should be the correct answer.  Regardless, these two answers are too close to say that someone who answers (c) is not a safe firearm owner but someone who answers (a) is.

In the field, a live round must never be loaded into the chamber until the shooter:

Under what conditions would this occur in Australia?  The ‘shooting area’ in many cases is an entire farm, and there are no game animals in Australia that can be flushed.  Would the Police condone the flushing of hunted species, such as kangaroos? What are the safety implications for this type of hunting?  With birds the game is always well away from the person or animal doing the flushing – this is not the case with ground animals which make up a large proportion of animals hunted in Australia.  This question has been taken out of context from some European firearm safety manual and could be written much better to apply to Western Australian shooters.

In the field, firearms must always be carried;

What is the difference between (a) and (c)?  People answer (a) only because it has more words.  These two must mean the same thing – (c) cannot mean with the action closed, because (d) is the same as (c) except in (d) they specifically state the action is closed.  The only difference is the ‘in the shooting area’, but firearms can only be carried in Australia while in the shooting area.  A very poor question.

This is an option of 4 pictures identifying how to remove a firearm from the boot of a vehicle. It is particularly poorly drawn.  It is very hard to identify the difference between the different pictures and is more of a product of elimination rather than identifying the correct method.

Modern Shotgun ammunition should not be used in very old shotguns because;

If you were firing modern ammunition in an old shotgun, it could simply not fire (due to tougher primers being used in modern ammunition or weak hammer springs in old shotguns).   The barrel may be too thin due to extensive use.  The recoil may break the stock or the gun may explode.  All answers are potentially correct.  The question doesn’t ask what the worst thing that could happen.  Again, someone who answers that the firearm may explode isn’t necessarily any more careful than someone who chooses one of the other answers.  This question does nothing to ensure safe handling of firearms and is simply a carry-over from the previous test.

When Travelling and carrying firearms and ammunition in a vehicle how should they be stored overnight?

This is to imply that securely locking firearms in a safe inside a motel room is the only way in which they can be stored overnight when travelling.  What are the implications for hunters travelling to the outback to go shooting – miles from any such formal accommodation such as a comfy motel?  What are the implications for motels – are they required to supply storage facilities for firearm owners?  It also goes against the spirit of the National Firearms Code.  The code says that it may be safer to lock the firearms up within temporary accommodation rather than leaving them in your car – it says nothing about the motel having the supply a safe.  The Code also suggests taking the appropriate trigger locks, chains or padlocks, so as to secure your firearm as safe as you can if a safe is not available to you.  Why would they be required if the firearm were only be allowed to be secured within a safe inside a motel room?  The required answer is incredibly misleading and clashes with the National Firearms Code.

Hunting game is a popular and important recreational activity that takes place in Western Australia and it is the responsibility of PLS to ensure those hunters carry out their sport safely and ethically.  Question 12 and 13 specifically outline instances that you should not fire at game animals, but beyond that there is nothing to establish the applicant’s ability to safely and humanely dispatch game.  No requirements to identify where certain animals need to be shot or what calibre firearms are suitable to dispatch certain game.

Firing ranges in Western Australia are templated so that if an inexperienced shooter makes a mistake and misses the target the projectile will not endanger the public – no testing is done as to whether an applicant understands how far their projectile will travel if they miss.

PLS use the National Firearms Code as their information document but ignore it in the test where it suits them.  If PLS believe the national standard to be insufficient they could write their own information booklet, or they could adopt a National standard for firearms safety, but they chose neither option – this is extremely lazy.

These issues could have been mitigated by consultation with the industry – while Bill Beaton was the president of the WAFTA the PLS requested the names of several firearm stores who could assist by trialling the new system before it was implemented.  This list of firearm businesses was never utilised and the new system was released with no consultation.

So after a delay of almost 6 months the new system was introduced. Almost immediately there were delays due to errors, causing the system to be delayed a further three weeks.  The result of this delay were massive shortages of applications being processed – approval for firearms purchased from us went down 85% for the month the new system was implemented.  Predictable poor performance from a department with a track record for incompetence – every change of systems that has occurred at PLS in the last two decades has been plagued with issues.