We are encountering issues regarding property letter sizes.  Specifically, a change in policy within Police Licensing Services (PLS) on what are adequate property sizes for certain calibre firearms.  A client recently had a firearms license application refused for a shotgun on 6 acres.

The PLS maintain they have a duty of care and responsibility to ensure license applicants have access to a property to safely shoot a firearm on.  Property size has a large part to do with this.  They do this by applying arbitrary rules, that do not exist in legislation, to decide whether or not a certain license application should be granted.  PLS will not officially release these figures.  Subsequently, acceptable property sizes change periodically without consultation with the industry or even a warning.

These changes make it particularly hard for firearm dealers to advise clients on suitable firearms for their requirements.  While a certain caliber would be needed to humanely kill certain pests or to engage in a certain style of recreational shooting, there is no certainty that PLS will approve that caliber.  This results in license applications being refused, when similar applications were granted only weeks prior.  Firearm Dealers and license applicants lose money and considerable time is needlessly wasted.  The Police Licensing Services claim to assess applications individually and consider other factors – we do not accept this.  Our experience is that little other than property size is considered by assessors in the application process.  License applicants are usually forced to ‘fight’ to get applications approved, often explaining relatively simple realities of pest eradication to assessors with seemingly little training.

Prior to firearm licensing being centralized in 2009, firearm applications for shotguns and .22 long rifle chambered firearms would be approved on 5 acres regularly, and rightly so.  When used sensibly it is entirely possible to maintain the safety requirements that the Firearms Act of Western Australia contains.

This is because, prior to 2009, the topography of the property was considered by the local police who were in charge of processing the license.  When judging whether a certain calibre is safe to use on a certain property, topography is more important than size.

Topography is difficult for central licensing to judge without inspection.

As such, topography has taken a back seat and now land size is the primary attribute judged.  Land size is supplied to Police Licensing Services on a firearm license application.

Just because topography is more difficult to judge than size does not mean it is any less important than when firearm licensing was done at a local Police level.

Police Licensing Services have decided to increase these property size requirements.  This isn’t in response to any particular event; no one has accidently been killed and no property has been damaged.  There are no new threats.  There has been no introduction of new technology.  Ammunition isn’t more powerful than it used to be, nor has there been a reduction in international standard regarding sizing or area.

We have been able to gauge required acreage from refused applications and from what little information we can garner from Police Firearms Licensing.  The required property size to license a shotgun is now double that of what it used to be.  The required acreage for a 22 magnum has gone from 25 acres to 100 acres and a 22 long rifle from 5 acres to 25 acres.  Each of these changes represents a large increase on what was previously acceptable.

These requirements do not take into consideration the many other issues regarding safe firearm use.  Rather, they are just the application of a policy that considers the most important factor the one that is easiest to obtain.  A major factor, commonly ignored, is the requirement for firearm license holders to ensure vermin is dispatched humanely.  Placing onerous property size restrictions on license applications means that license holders are required to attempt to destroy vermin with firearms that are underpowered – they are forced to destroy vermin inhumanely.

On 18 November 2015, the Hon. Rick Mazza asked several questions regarding property letters and Police Licensing Services’ policy.  The response he received from the Attorney General, the Hon. Michael Mischin, representing the Police Minister in the Upper House, contained only two pieces of useful information.  Firstly, an allegation that firearm license applicants were modifying the property letter template provided on the Police website to read ‘Owner/Manager’.  This is untrue. I still possess the original document from PLS (listing the author of the document as being an employee of Police Licensing Services) which has the wording “Owner/Manager”.  Second, there was an assurance that “No changes to policy will be made until the finalisation of the Law Reform Commission review.”.  The Hon. Michael Mischin has either been poorly briefed or deliberately deceitful. 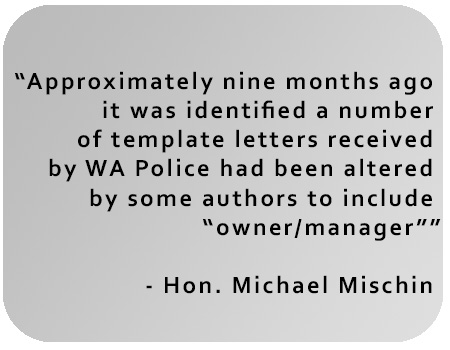 The review was only out a few weeks and the Police decided the change their internal policy regarding property sizes.   It is reasonable to assume that the recommendations contained within the Law Reform Commission Review would be considered before making any policy changes.

“The Commission does not wish to overemphasize the relevance of the size of the land; there are other equally important factors such as the necessity of a certain calibre firearm to humanely kill certain size vermin”

Recommendation 56 .3 of the Law Reform Review, regarding property letters, states;

If the Police have read the Law Reform Commission review, not only have they entirely disregarded this entire section, but gone further to enforce even stricter conditions than already exist.  Under the latest changes, if a license holder has a property smaller than 25 acres, they are required to destroy rabbits using one of two methods;

There is an argument that some powerful air rifles are adequate to destroy rabbits.  These air rifles fire relatively heavy projectiles – some almost as heavy as a 22 long rifle projectile, at speeds well over the speed of sound.  There is no safety benefit in forcing property owners to use an air rifle which rivals a 22 long rifle in power whilst not allowing them to simply use a 22 long rifle chambered firearm.

Under the new property requirements, any orchardist with a property size smaller than 10 acres is forced to either inhumanely destroy kangaroos, face financial ruin, or falsify their firearm application by stating they want to shoot on another property.  How is this in the public interest?

How the Requirements are Calculated

It is no coincidence that the Police Licensing Services have arrived at nice round figures such as 10 acres, 25 acres, 100 acres, 500 acres, 1000acres and 2000 acres for certain calibres.  Considering the danger area of certain cartridges, angles of error that are likely to occur, likelihood of ricochet and ricochet angles, templating areas for certain calibres and other factors, it would be impossible to arrive at these figures with any formulated approach.  The Police are basing their policy on arbitrary figures they have invented with no empirical base or scientific backing.  This is further reinforced by the fact that they will not release the methodology by which they have arrived at these figures.

These restrictions do nothing to protect the interests of small property or recreational shooters.  Nor do they increase public safety. The PLS priority is one of self-interest, dissolving themselves of blame in the event someone breaks the law.  This attitude dominates all other factors of licensing.

In enforcing such strict conditions of licensing, PLS reveal their mistrust for firearm license holders.  Other examples of PLS mistrust include; 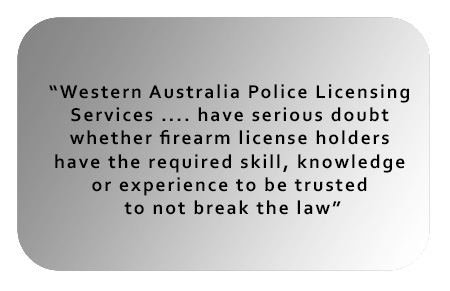 Western Australia Police Licensing Services must be enforcing such hard conditions because they have serious doubt whether firearm license holders have the required skill, knowledge or experience to be trusted to not break the law.  These points can be mitigated with training, yet bizarrely, PLS oppose practical firearms training.

The PLS submission to the law reform commission reads;

“Comprehensive training for a person who wants to join a club is a practical idea, but should not hinder the primary producer and/or the license holder who wants to recreational hunt and shoot.  By enforcing training provided by an approved club or organization would add costs to the applicant for a recreational hunting license and could force quasi membership.”

The PLS make these assertions, but give no explanation as to why club members are deemed able to absorb the additional costs and other firearm license applicants, such recreational shooters and primary producers, cannot.   The PLS seem concerned with the economic cost to the firearm applicant, yet WA licensing fees are many times higher than any other licensing authority in the country.  Meeting safety requirements should never an economic consideration – regardless of whether it is a driver’s license, forklift ticket or skipper (boat) ticket.  If someone wants a certain license, they will meet the fiscal requirements.  Additional cost of safety training is unlikely to ever be so high as to deter anyone from applying for a firearm license.

The Police oppose safety training because they don’t want the extra work of certifying training programs and organisations.  They are not interested in public safety or animal welfare, they are only interested in keeping their work load low protecting themselves from criticism and litigation.